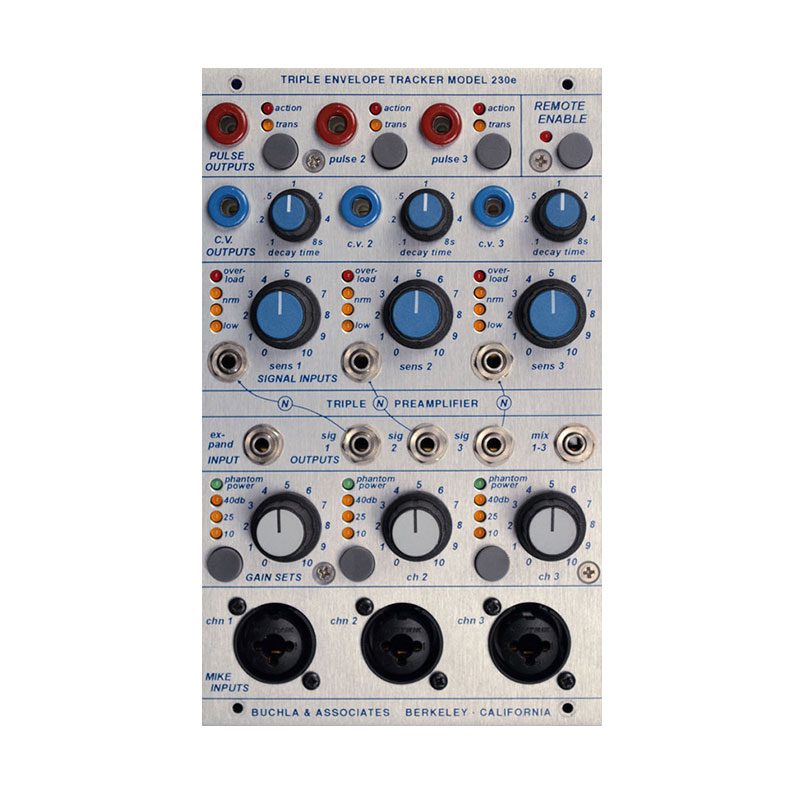 Building on the original 230 Envelope Detector, the 230e features not only a new name that better identifies its functionality, but also improved performance, a built-in three-channel microphone / line preamplifier, and the ability to store and retrieve most settings via the 206e or 225e Preset Manager.

The 230e’s three envelope trackers have adjustable gains and variable response times. Output levels are 10V full scale, with LEDs indicating intermediate values. Pulse outputs are triple-state, responding to signal level changes as well as steady states, and may be coupled so as to respond to transient information even in the presence of background activity, such as when detecting drum trigger information within a full mix. Pulse activity is indicated by LEDs.

Three preamplifiers are on-board, each with variable gain and dual input connectors (1/4′ TRS / XLR). Balanced or unbalanced microphone or line level signals can be accommodated; phantom power is available if needed.

The preamplifiers feature both input and output connections,allowing it to be used as a basic mixer. The outputs are also normalled to the envelope trackers’ inputs, enabling dual use of the preamplifier output signals.

All 230e settings with the exception of the preamplifier input gains are stored as part of a preset using a 206e or a 225e Preset Manager.