The Red Panel product line has been discontinued. 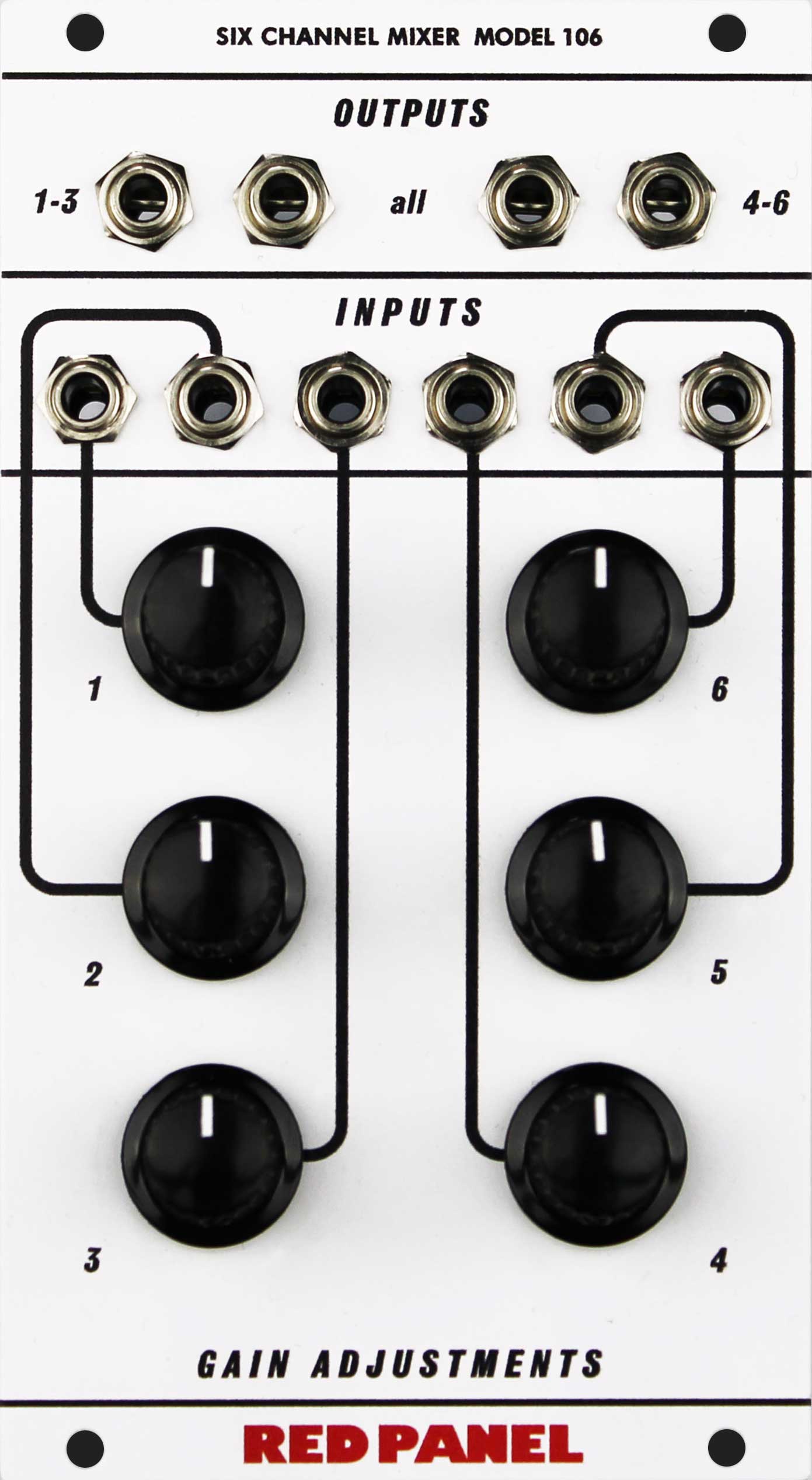 The Model 106 is a 100% discrete transistor based 6 input audio mixer.

Aurally, the all transistor signal path adds its own unique sonic signature, imparting a subtle lo-fi warmth and saturation to the sound.

Additionally, The “All” output is inverted with respect to the “1-3” and “4-6” outputs. This feature can be exploited to creative effect. 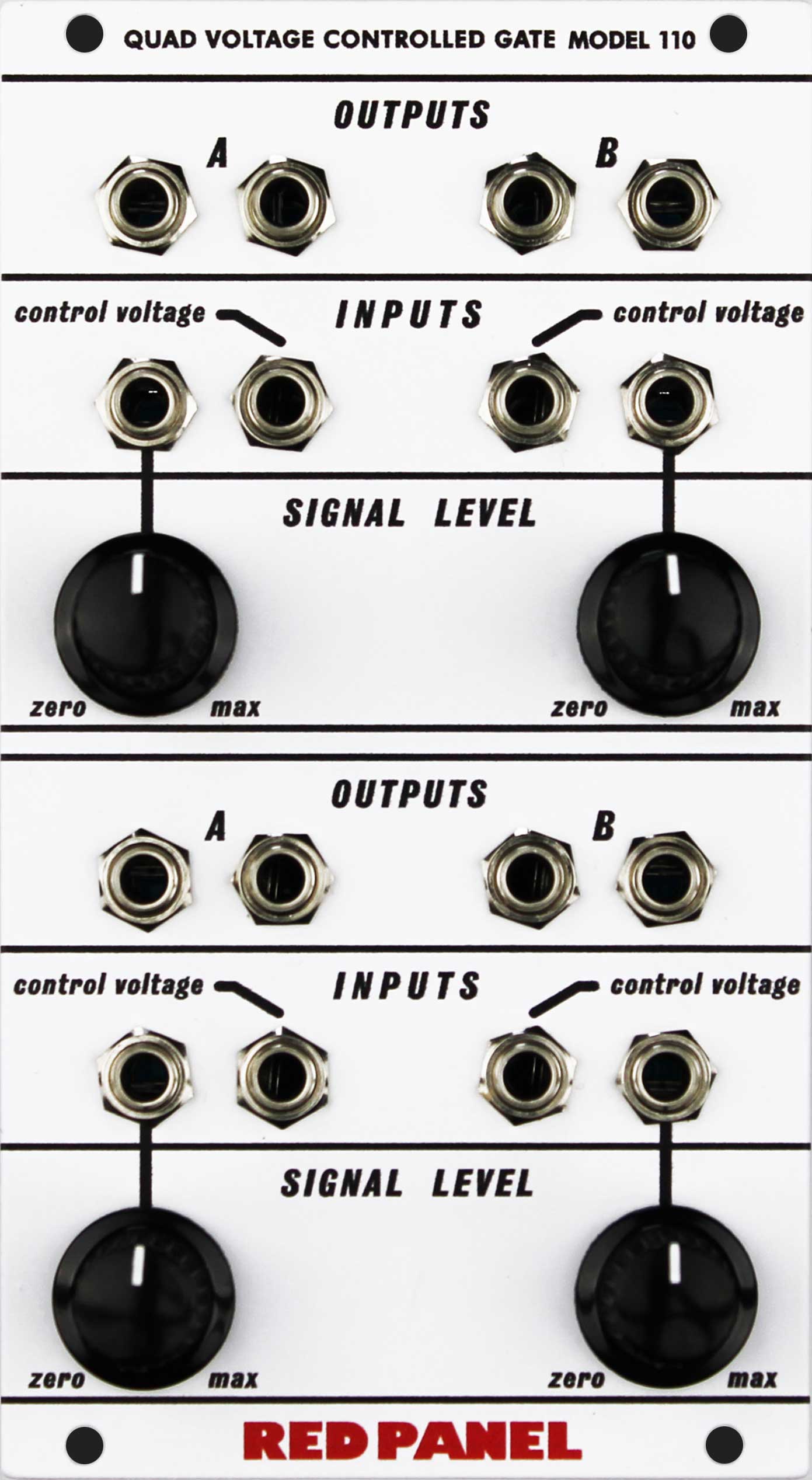 The Model 110 is 4 independent transistor based voltage controlled amplifiers behind one panel. Each VCA (or “gate” in the original terminology) consists of an audio input with an attenuator, a CV input, and 2 outputs. The VCA’s are AC coupled – meaning that they will not pass slow (or static) control voltages. The VCA’s are calibrated to unity (an input of a 10v peak to peak audio wave, will produce a 10v peak to peak audio wave at output) when 5v is applied to the CV input and the attenuator is at approximately the 3’oclock position.

Notes: Unlike the later (and better known) Model 292, the original low pass gate – The Model 110 is entirely transistor based (rather than vactrol based like the 292), and is much faster. 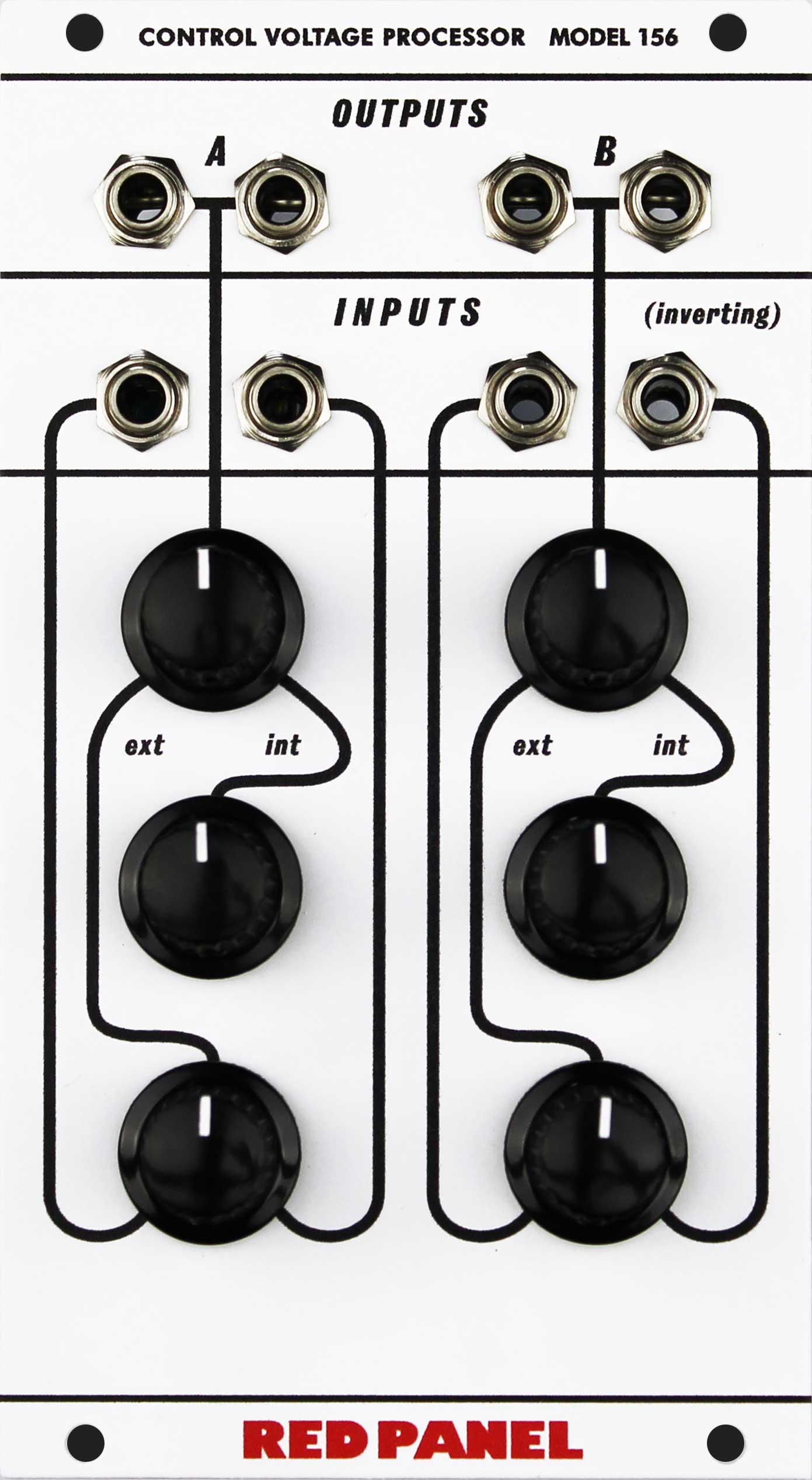 The Model 156 was likely the first “CV manipulation” tool ever available to modular synthesists. In the original 100 series environment, the 156 was used as a front end to nearly every other module with a CV input. The majority of CV inputs throughout the 100 series do not have associated attenuators or offsets built into the modules, and thus they relied on the 156 to scale, offset, and attenuate the voltages traveling around the system. The 156 consists of 2 independent “voltage processors” Each with a control to mix the two inputs, add a voltage offset (positive only), and then a control to mix between the external CV to be processed and the internal offset. In addition, the “B” channel has an inverting input. The 156 is as close a replica to the original 156 as possible, and is built entirely of discrete analog components. 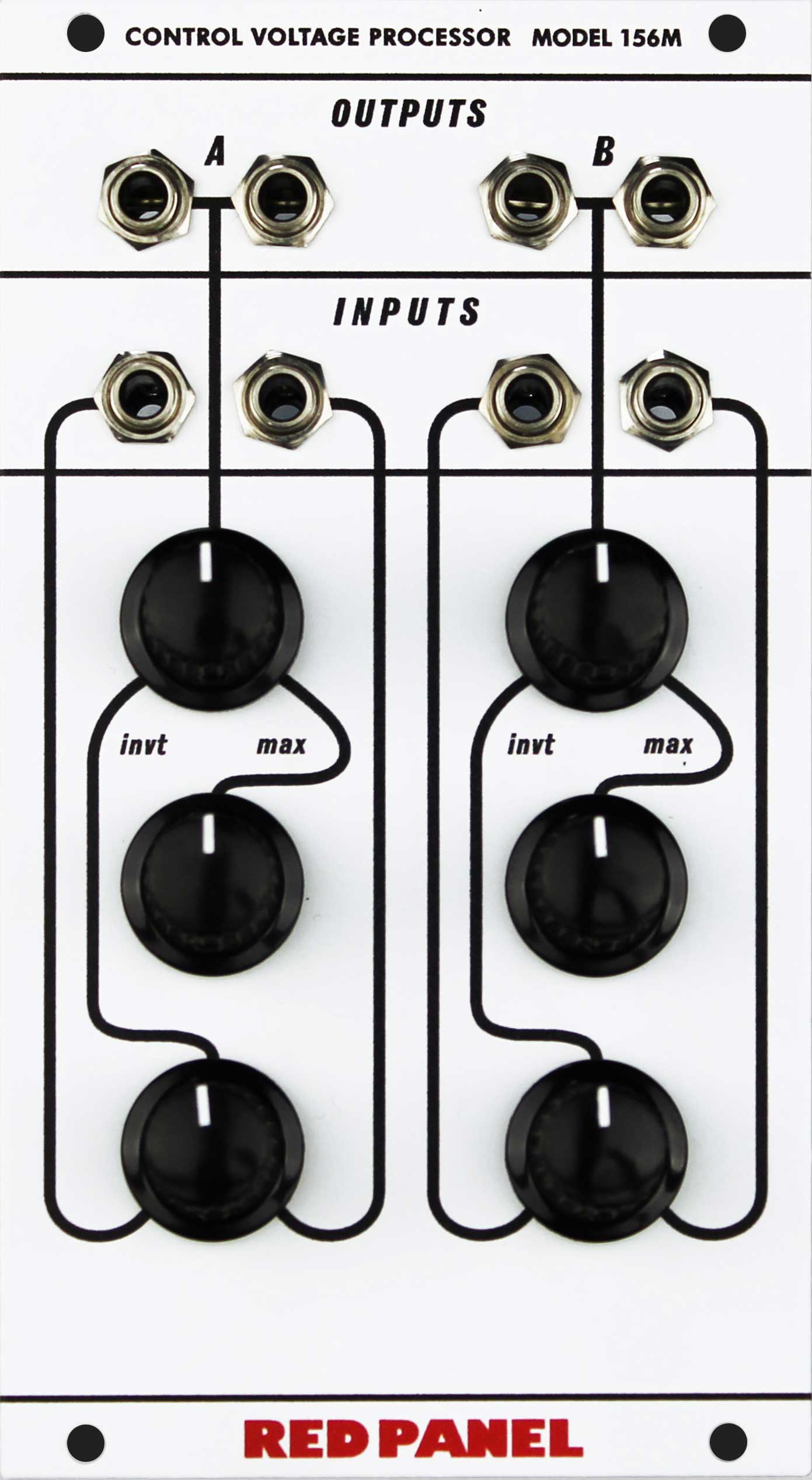 The 156 is an accurate reproduction of the original 156, however it’s accuracy also means that it’s functionality is based entirely on the needs of a cohesive system designed in the mid 60’s. It cannot work with negative voltages, the maximum gain is set at 1:1, and the transistor core makes it inherently nonlinear.

The 156M is a modern update of the original 156 that we feel both works within the paradigm of the original 100 series and helps to interface with modern eurorack gear. Like the 156, the 156M consists of two independent voltage processors. Each side can mix between 2 independent control voltages, This mix can then be offset by either a positive voltage or (unlike the original) a negative voltage. The mixed and offset control voltages can then be attenuverted – which allows the user to set the gain in either a positive or negative direction and can also boost the gain to approximately 1.5x the original signal. In essence, the combination of these three facilities allow you to mix, offset, compress, expand, invert, amplify, or scale any CV source. 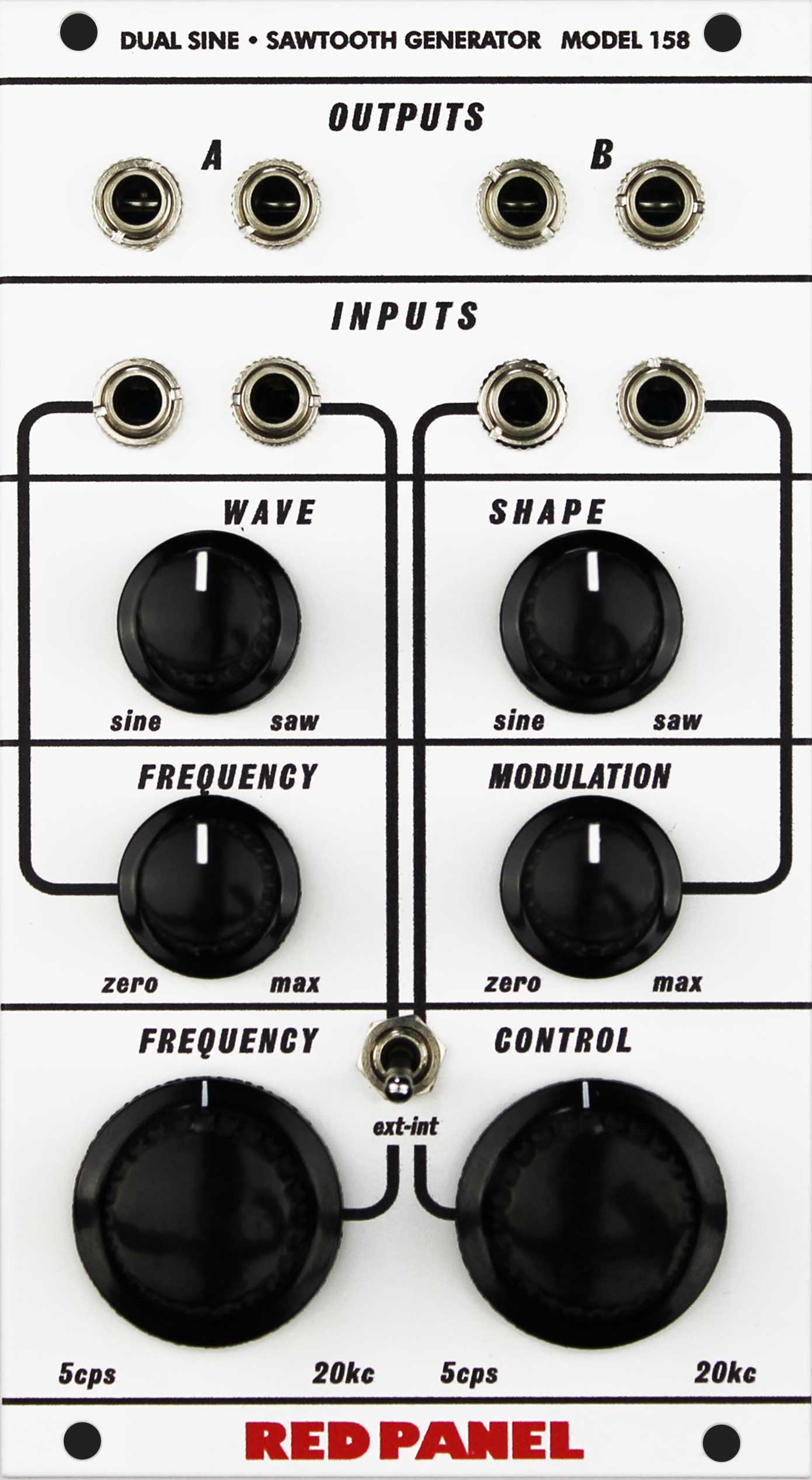 The Model 158 is a dual oscillator created out of an entirely discrete transistor core. It consists of two independent and identical sides each with a front panel tuning knob, a frequency modulation input and attenuator, and a knob to fade smoothly between saw and sine waves. The RED PANEL model 158 is based off of the original “A” variant of the 158 oscillator.

The 158 was one of the very first voltage controlled oscillators ever produced. As such it contains many particular quirks/rawness of this first generation of synthesis. The exponential scaling of the oscillator is far from accurate, there is no temperature compensation, quick changes in pitch produce a slewing effect, and the saw waveform only vaguely resembles a saw wave through part of its range. It is as accurate a recreation as we believe is possible with the components available today. We performed hundreds of listening tests to find suitable replacements for obsolete transistors, and hand select multiple transistors on each individual unit to ensure that they have the proper sound. 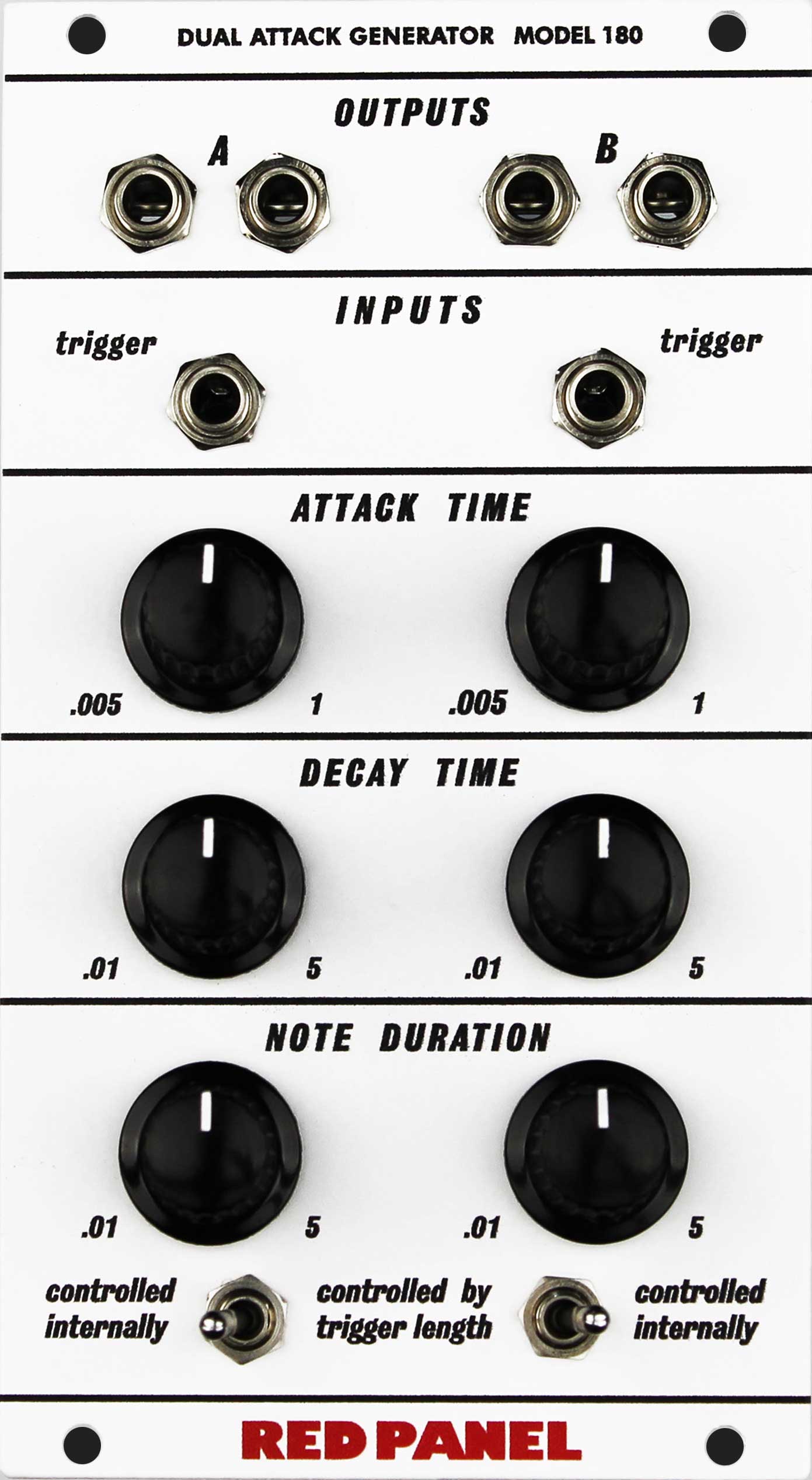 The Model 180 is 100% discrete transistor core dual channel A/D A/H/D function generator (envelope). A trigger or gate signal greater than 2.5v at the “trigger” input causes the output CV to linearly ramp up to its maximum value at a speed set by the “attack time” pot. Once reaching the maximum CV output (set from the factory at 5v but easily adjustable via trimmer) the module will hold at this level for a static duration set by the “note duration” pot, or will hold at its maximum level as long as the trigger input is high. This behavior is selected with the “controlled internally” vs. “controlled by trigger length” switch. At the end of the “hold” period the CV output will ramp back down to approximately 0v at a rate set by the “decay time” pot.

Like many “west coast” function generators, the envelope cannot be retriggered until the attack phase is complete, allowing for some function as a clock divider etc..). The attack, hold, and decay times can be set very fast, and the module can easily create percussive blips as well as longer drawn out envelope shapes.